Normally, node-locking (aka machine code locking) works on a per device basis. When end users switch devices often, node-locked licenses might not be ideal since the old devices would need to be deactivated to allow new ones to activate. One solution to this is to use floating licensing, where deactivations occur automatically. Another solution is to activate users instead of their devices, i.e. license on a per user rather than per device basis. 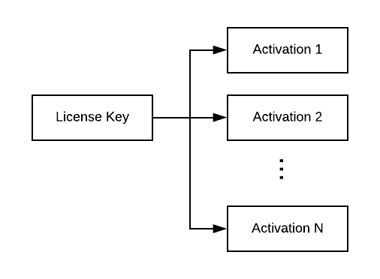 There are two ways you can license on a per user basis:

One way to identify a user is by using their user principle name, which can be obtained with the command below:

Activation and verification of a user can occur using the same method, e.g. Activate, as shown below:

The idea is to store their password hash inside the machine code field, allowing your application to verify that a certain password is correct but not be able to obtain the real password. Helpers.ComputePasswordHash uses a special algorithm (more precisely PBKDF2) to compute hash in such a way that it is harder for an adversary to guess. Normal hash functions such as SHA256 are very fast to compute, whereas PBKDF2 makes the computation slow on purpose so that it takes longer time to guess the original password.

To add a new user, the code below can be used:

In the verification phase, we need to use Key.GetKey instead of Key.Activate, since we don’t want to allow the end user to add new users. If you want to allow users to do that, feel free to change back to using Key.Activate.

How is this approach different from the original user account authentication tutorial?

Currently, a customer object can only have one user associated with it. Since user based activations (described in this tutorial) stores each user as an activation of a license, you can create any number of users. This also means that you have more control over user creation.